Presentation Invasion, or FRC Team 2135, is based at Presentation High School, a single-sex Catholic school for young women in San Jose, CA. Founded in 2006, our team has grown from a handful of students to 30 active members that participate in the FIRST Robotics Competition. We are an all-girls team dedicated to creating a safe and comfortable environment for our membezrs to learn about STEM-related fields while building robotics skills.

Through designing, manufacturing and programming robots, Team 2135 is actively involved in shaping the female engineers of tomorrow through inspiration and innovation. Our members are part of both a club and competitive team; each member has a different level of experience and commitment. We meet all year, though many come during the fall and winter. Our team has dedicated working space in the Jenvey house garage across the street from our school. Our machines and tools include a CNC Mill, CNC Table Router, NC Lathe, and sheet metal brake among many other shop features that students learn to operate and use. 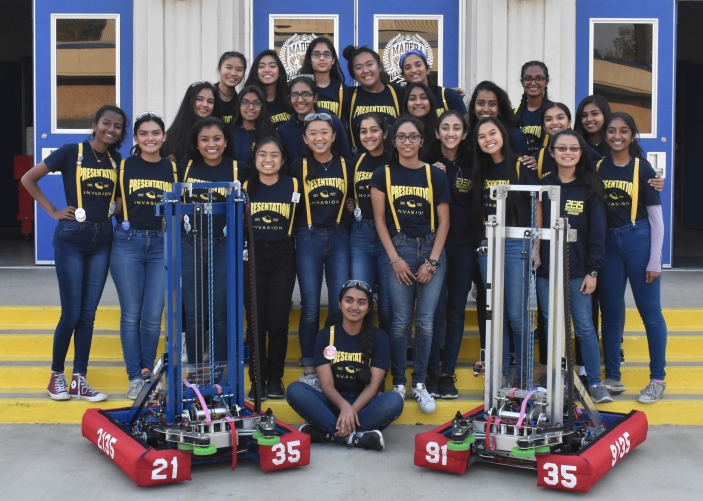 As an all-girls team, we focus on inspiring young women to pursue fields relating to STEM. By giving them a chance to try real-world engineering through building robots and solving problems as a team, we foster and develop the skills, knowledge, and confidence in these young women. Our goal is to have our members become well-versed in various aspects as they work together to build and design their robot.

During the 2018 season, leaders Alyssa Ungerer (Class of 2018), Arshia Sharma (Class of 2018), Anjali Sinha (Class of 2019), and Samantha Yang (Class of 2019) developed and organized training to accommodate the team, which almost doubled in size. They worked hard to successfully keep the team moving forward and staying on track throughout the year. For the Power Up game, we built our robot, Felix, which participated in the Arizona North Regional in March in Flagstaff with 2 girls nominated for the Dean’s List Award: Anjali Sinha and Samantha Yang. Anjali was selected as a Dean's List Finalist! Then we competed at Silicon Valley Regional in San Jose, CA, where we were ranked 13th at the end of the Qualification Round. We were chosen to be on the 3rd seeded alliance with Team 6418 - The Missfits and Team 8 - Paly Robotics, and made it to the semi-finals. In April, we took our Dean’s List Finalist and a few other members to the FIRST FRC World Championships in Houston; they volunteered there and attended several workshops. 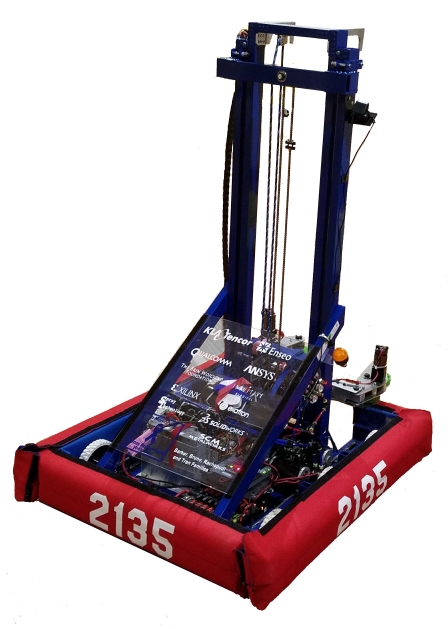 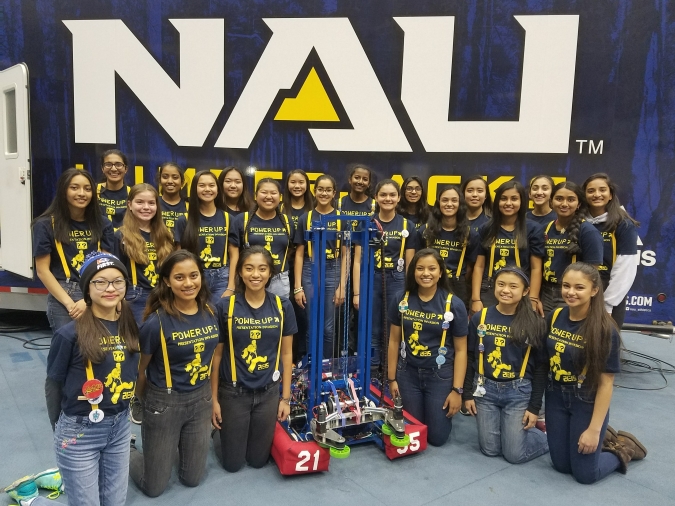 The 2017 season was a very successful year for Team 2135! Led by Arshia Sharma (Class of 2018), Alyssa Ungerer (Class of 2018), Anjali Sinha (Class of 2019), and Samantha Yang (Class of 2019), the team worked hard to analyze game strategy, design, and build our robot Crush who was named after the turtle in Finding Nemo. We then competed at Central Valley Regional where we were selected to be part of the 2nd seeded alliance with Team 1678 - Citrus Circuits and Team 1323 - MadTown Robotics. Together we worked hard and won the regional event. Later, at Silicon Valley Regional, Team 2135 continued to perform well and was declared a finalist for the Safety Award. As the Regional Winners at CVR, we qualified for the FIRST World Championships in Houston, Texas. In April, the team took a group of twenty students to the FRC Houston Championship where we competed in the Galileo Division. 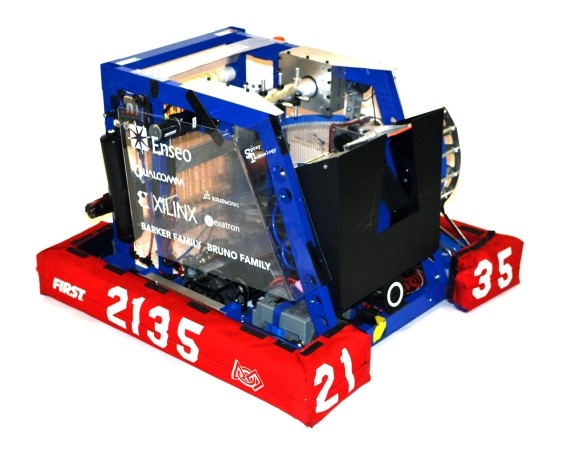 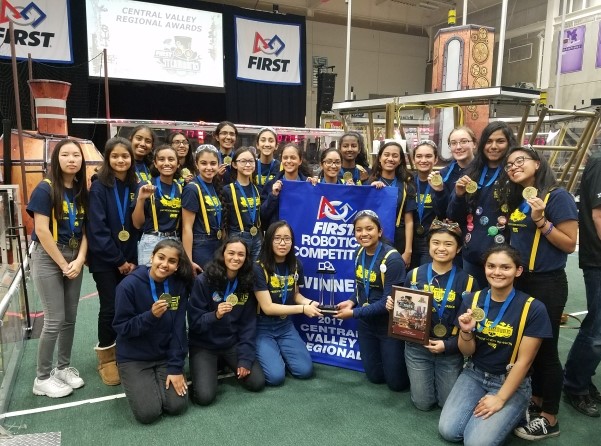 The 2016 season was intense and exciting and marked Team 2135’s 10th season. Co-presidents Liana Rix (Class of 2016) and Chris Dhayanand (Class of 2016) led the team of roughly thirty students. With their robot named Maximus the Stronghold (Max), the team competed at Central Valley Regional and was chosen for the 2nd seeded alliance by Team 5137 - Iron Kodiaks and Team 973 - GreyBots, playing in the semi-finals. The team also competed at the Silicon Valley Regional, and even after breaking the intake arm twice, they were able to pull all their knowledge and resources together to repair and fix it in time for the following matches. Off-season competitions were equally as exciting. At Chezy Champs, Team 2135 was selected by the first-seeded alliancr and joined with Team 1678 - Citrus Circuits, Team 971 - Spartan Robotics, and Team 604 - Quixilver. Together, we played some intense matches and ended up victorious as the Chezy Champions! At MadTown Throwdown, we competed with Max and Baymax. Max was the 8th seeded alliance captain, and Baymax was chosen for the 3rd seeded alliance. Both went to quarter-finals, and Baymax advanced to the semi-finals. Team 2135 also won the WOW Factor Award for simple, elegant, and efficient design. 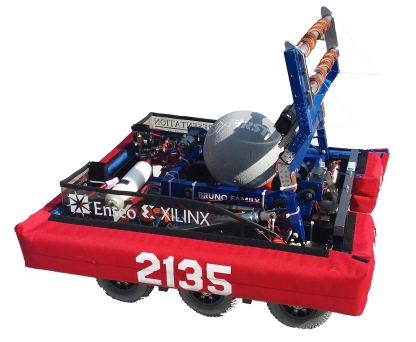 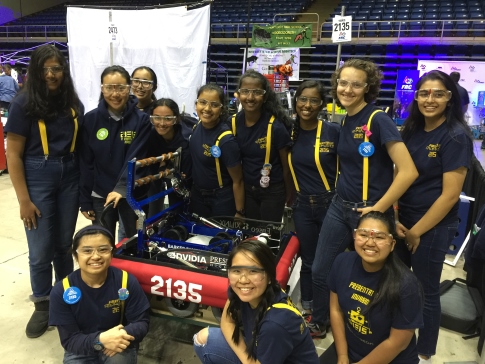 The 2015 season was played with Team 2135’s robot named Archie and was led by co-presidents April Mullins (Class of 2015) and Neha Tibrewal (Class of 2015). Competing at the Sacramento Regional, SVR, and at the off-season Chezy Champs Competition, the team worked hard and gained much experience. At the off-season MadTown Throwdown competition, playing the 2014 game Aerial Assist with Atlas and Batlas, the team did very well. Atlas was the 5th seeded alliance captain with Team 973C - GreyBots and Team 5817 - Uni-Rex. Batlas was chosen for the 6th seeded alliance by Team 3482 - Westmont HS Arrowbotics and Team 604 - Quixilver. Both were quarter-finalists, and Team 2135 won the Gracious Professionalism Award. 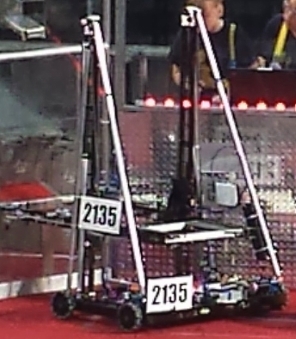 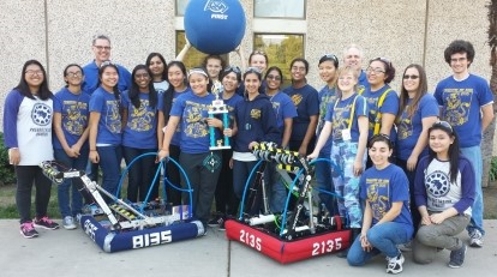 The 2014 season was a remarkable year for Team 2135, and was led by Kiruthika Shanmugam (Class of 2014). After working hard on robot Atlas, the team attended Central Valley Regional. There, Team 2135 was chosen for the 1st seeded alliance by Team 254 - Bellarmine Cheesy Poofs and Team 973 - Atascadero HS GreyBots and won in the finals. Later at Silicon Valley Regional, the team was chosen by the 4th seeded alliance, Team 1323 - MadTown Robotics and Team 846 - Lynbrook HS Funky Monkeys, and together they were semi-finalists. Having won at CVR, Team 2135 competed at the FIRST World Championships in St. Louis, Missouri, in the Galileo Division. During off-season, the team competed at Chezy Champs and was chosen by the 2nd seeded alliance: Team 846 - Funky Monkeys and Team 971 - Mountain View HS Spartan Robotics. They were finalists. At MadTown Throwdown, the team’s two robots, Atlas and Batlas, were both Alliance Captains. Atlas was the 4th seeded alliance captain with Team 1323 - MadTown Robotics and Team 971B - Spartan Robotics. Batlas was the 7th seeded alliance captain, with Team 1422 - The Neon Knights and Team 3970 - Duncan Dynamics. Both played in the quarter-finals, and the team won the Spirit Award. 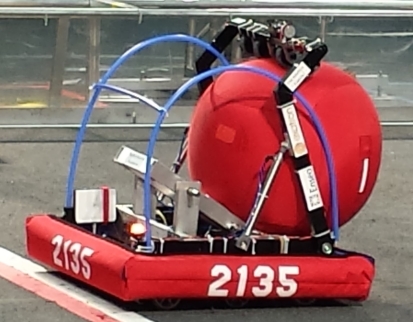 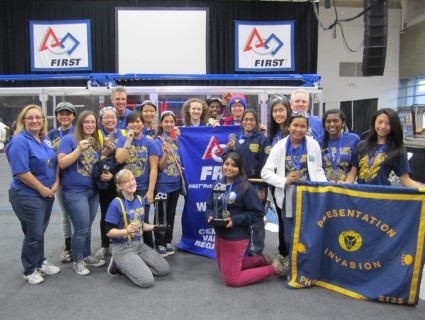 The 2013 season was focused on building, testing, and competing with Team 2135’s robot named Steve Rogers. Co-presidents Jennifer Early (Class of 2013), Gabriella Pastera (Class of 2013), and Emily Mullins (Class of 2013) all helped drive the team forward. The team competed at Central Valley Regional (CVR) and was chosen for the 3rd seeded alliance by Team 1458 - Red Tie Robotics and Team 1671 - Buchanan Bird Brains. They were quarter-finalists. Team 2135 also competed at SVR and then at MadTown Throwdown during the off-season. There, they were chosen by the 6th seeded alliance, Team 2813 - Prospect HS Gear Heads and Team 604 - Leland HS Quixilver, and were again quarter-finalists. 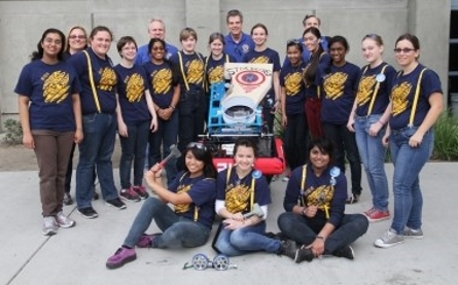 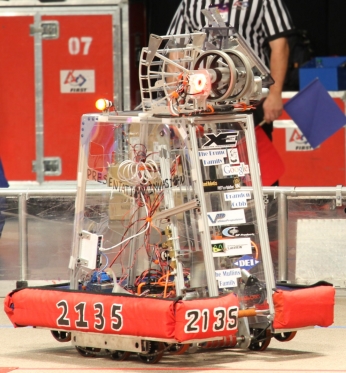 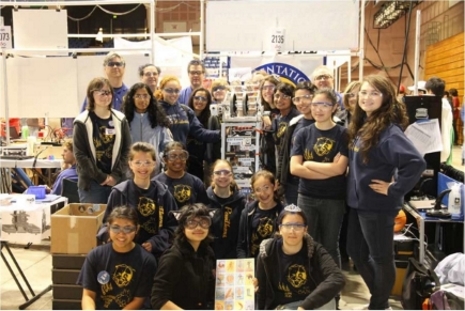 Led by Mary Gatesy (Class of 2011), Team 2135 competed at Silicon Valley Regional and then MadTown Throwdown in the fall. At the off-season competition, MadTown Throwdown, the team was chosen for the 4th seeded alliance by Team 968 - Robotics Alliance of West Covina and Team 254B - Bellarmine Cheesy Poofs and played in the semi-finals. 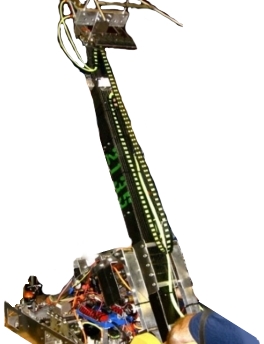 The 2010 game had proven to be a challenge. Led by Sarah Watanabe (Class of 2010), the team overcame many obstacles during the building of a more complex robot than previous years. During off-season, Team 2135 competed at the MadTown Throwdown in Madera on November 13. The Presentation Robotics Team qualified as a part of the semi-finalist round and placed 9th out of 20. It was a close game with the team only one win away from becoming finalists. It was a fantastic way to end the 2010 season with an even better start to 2011. 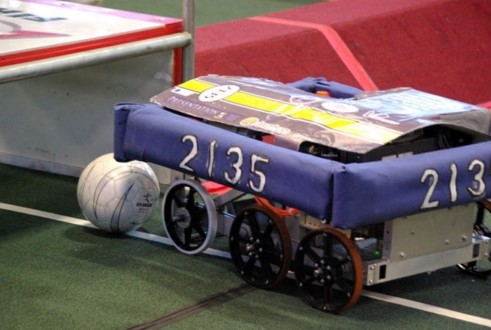 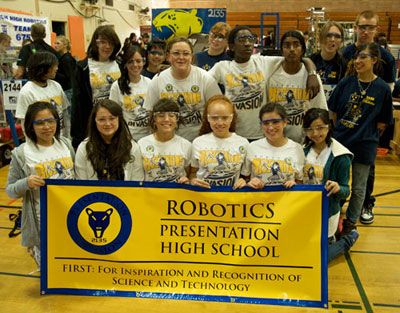 The 2009 season was led by Erin Simpson (Class of 2009). During the season, the team expanded to include twenty-six eager and bright-eyed members. The team made it to CalGames with great enthusiasm, and despite their anxiety and inexperience, was able to place an impressive 12th out of 36 teams. At Silicon Valley Regional, their efforts were shown when they were placed 16th out of 49 competing (and more experienced) teams. In alliance selection, they were chosen to be a part of the 8th seeded alliance. 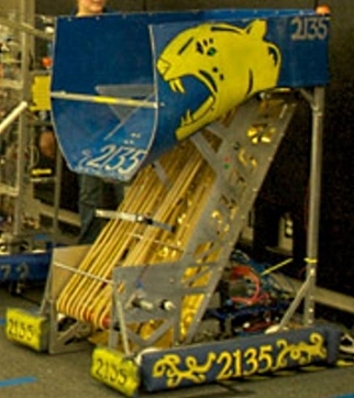 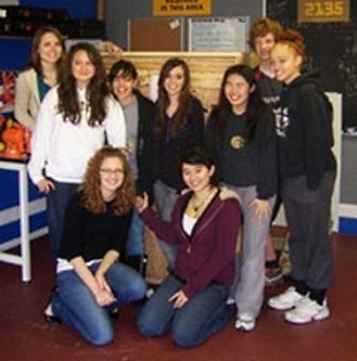 After ending the 2007 season on a good note, the team was prepared to make more changes for the 2008 season. With leaders Arielle Virrey (Class of 2008) and Elaine Higashi (Class of 2008) along with many dedicated mentors, the team’s knowledge expanded exponentially. Their skills were put to the test when the software had to be recoded about five weeks into the build cycle. They were forced to start a new software program with SVR rapidly approaching. Fortunately, the team successfully leapt over this barrier and made it to the competition with their robot performing at optimum levels.

Presentation High School first became interested in robotics in 2006. Two sophomores, Elaine Higashi and Arielle Jeriza Virrey, had developed a strong interest in robotics and wanted to learn more about the field and its mechanics. After approaching Principal Mary Miller and Dr. Howe of the Mathematics and Science Academy at Presentation, the two girls were given two VEX robot kits. With great enthusiasm, Elaine and Arielle gathered a few other interested friends and began assembling the robots. Within a short period of time, they had completed the project and presented it to Ms. Miller and Dr. Howe. Both were very impressed in the girls’ voluntary commitment in building the robots that it was agreed a club would be formed. For the rest of 2006, about 12 girls worked on more VEX kits after school for fun.

In 2007, the robotics club expanded and joined the FIRST Robotics Competition. By this time, the club had transformed into a team consisting of 15 students all of which were dedicated to building a robot. Within the first year of entering the competition, the students’ knowledge and skills grew tremendously considering their lack or original knowledge or prior experience. The students quickly comprehended the mechanics of robot building and the various fields involved in creating it.

Naturally, Team 2135 ran into various obstacles along the way, such as a tight budget, safety of the students, and so forth. Teachers were concerned about students’ safety while building the robot, especially since it took place in the school’s hallways. Presentation’s Robotics Team did not yet have a dedicated working area or many power tools, but they were able to overcome the obstacles and still proved successful during the competition. During 2007, Team 2135 competed in the Silicon Valley Regional (SVR) and Sacramento Regional (Davis). In the Silicon Valley Regional, they received the Highest Rookie Seed Team Award and the team’s website was given the Website Excellence Award. Once the 2007 season ended, Presentation High School purchased a house as an area specifically dedicated for the Robotics Team.